‘There’s Music in the Air’

You probably didn’t realize it but Tuesday, May 18, 2021, was a very special day in Fort Wayne for many musicians. At 7:30 p.m. that evening, members of the Fort Wayne Area Community Band (FWACB) gathered for the first time in about 413 days for a rehearsal!

The last concert the Band played was on March 3, 2020, at The John and Ruth Rhinehart Music Center’s Auer Performance Hall on the campus of Purdue University, Fort Wayne (PFW). The concert, titled “Art of the Dance,” was an ongoing celebration of the band’s 40th anniversary year which officially began in 2019 on Nov. 29 and included a special pre-anniversary concert on Oct. 22, 2019.

One week after the March 3 concert FWACB members gathered on March 10 in the Auer Performance Hall band room to begin rehearing for the next concert on May 5, 2020. In addition, the band was in the process of scheduling guest artists for all of its concerts in 2020 as well as commissioning a new piece by Anthony O’Toole, in hindsight appropriately titled “The Crossroads,” to be performed on its Oct. 27, 2020, concert in commemoration of the 40th anniversary year.

All music was muted after that March 10 rehearsal due to the COVID-19 pandemic. We were told that, hopefully, the cancellation would not last too long and we would be able to assemble again to resume rehearsals and maintain our concert schedule. But, no matter how well you plan, there’s no guarantee of success, especially during a pandemic. I had a funny feeling at that last rehearsal. I looked around at everyone in the band and thought, “I'm not going to see these people for a very long time!”

Being a musician is not a job. It’s something you live for. We all missed the human connection, not only between each other but between the band and our audience.

The recent May 18 rehearsal definitely was a day the music started again. But it was a bit unusual. The rehearsal did not take place in the Auer band room as the final practice did on March 10, 2020. Due to remaining COVID-19 restrictions by PFW, the practice was held on the third-floor level of the Rhinehart Center Parking Garage. Musicians were asked to wear a mask, bring a chair, a music stand, a battery-powered light and wind clips. Oh, and one more thing: their instrument! 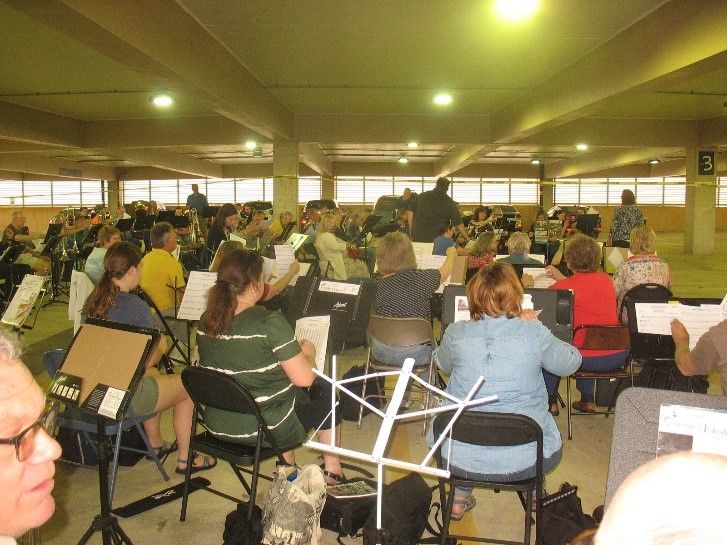 We even had a make-shift audience as curious students and faculty were drawn to the sound of 67 instruments blowing in the wind of the parking garage. That’s two thirds of the former 90-piece ensemble. It was great to see many familiar faces again and even seven new ones. Several musicians had lost weight and others were sporting a new hairdo: grey! And, we sounded pretty good despite some cobwebs on instruments that hadn’t been played for 15 months. But many dedicated musicians had continued practicing during the absence. They helped cover up any sour notes emitted from those whose tender lips were out of shape or who had forgotten the fingering for a couple of sharps or flats in the music.

The first piece we practiced appropriately was titled, “Sweet Sunset,” as the sun began to descend outside the campus parking garage.

“I can’t wait to be playing again,” said Sally Hinkle-Teegarden, FWACB president, prior to the rehearsal. Associate Conductors David Blackwell and Susan Jehl both were there to again lead the band in the summer. “It feels like we’re starting all over again for the first time,” Jehl exclaimed.

“Tuesday night has been 'band night' for 40 years,” added Rod King who is a charter member and plays tenor saxophone. “So, when this whole thing hit, it took a while to get used to staying home instead of going to rehearsal. It's great to be back playing and good to see band members again.”

As a charter member, past president and co-announcer of the band, there was no way I was going to miss that rehearsal! I was really anxious to finally take my trumpet out of its case and begin playing in an ensemble again. Practicing scales, exercises, long tones and arpeggios at home is not the same as playing together with other musicians, even if it’s just in a parking garage!

What are arpeggios? Ask your teenager or grandchild that question and listen to what he or she has to say. But before they can consult their cell phone you can impress him or her by replying, “Arpeggios are the production of the tones of a chord in succession and not simultaneously.”

The practice and those that follow weekly have a purpose as we attempt to bounce back and launch forward. Two concerts are scheduled this summer at Foellinger Theatre in Franke Park. They are “Together Again” on Tuesday, July 13, and “Music for a Summer Night” on August 10. Both concerts begin at 7:30 p.m., are free and open to the public. The band also is scheduled to perform on Saturday, July 17, at 8:00 p.m. at Friemann Square both before and during the closing fireworks of the annual Three Rivers Festival.

“There's Music in the Air, it makes the sorrow go. Let the Music take you there, far from the world you know.” (Artist: Letta Mbulu)